THE SPORT OF KINGS

What is the oldest tradition of Lahore? Some will say its Mughal monuments and relics. But what we are referring to started long before these were built!

Others might think of kite flying; or Lahore being famous for tasty food; or the dancing and music — even these followed after this tradition! What about the gates and heritage of the old walled city? Well, this tradition started just about in the same period, but a bit before. At that time, Lahore was just a small basti of agricultural Hindus where now Ichhra is. The conqueror Mahmud Ghazni (r. 998 to 1002 AD) made his famous slave and dearest friend Ayaz governor of Lahore in around 1000 AD. He rebuilt the old, ruined mud fort there, a remnant of Raja Jaipal of the Hindu Shahi dynasty and started construction of the walled city. The Tajik Emperor Mahmud, along with Islam brought with him the game of polo, which was the dangerous and exhilarating sport played by the fierce Turkic horsemen of Central Asia.

For the first time in history, this fertile junction in the heart of the plains of the five rivers, strategically located on the route to Dehli, was given importance. While the people went about their lives in the protection of the newly built walled city; farmers tilled the fields and men of learning became Qazis and Naibs; the fierce warriors from the north passed their time playing polo. They were so keen about the game that they even played at night time, putting the ball on fire so they could see it. It is said that their playing field was the same place it is played today. It was here that the Mamluk King QutbuddinAibak’s horse fell down and he got killed while playing polo (r. 1206 to 1211 AD). After that the Muslim Turk, Persian and Afghan dynasties came and ruled India. Subsequently came the Mughals. Prince Kamran, Akbar and Jehangir were especially fond of Lahore and Akbar and Jehangir liked playing polo. 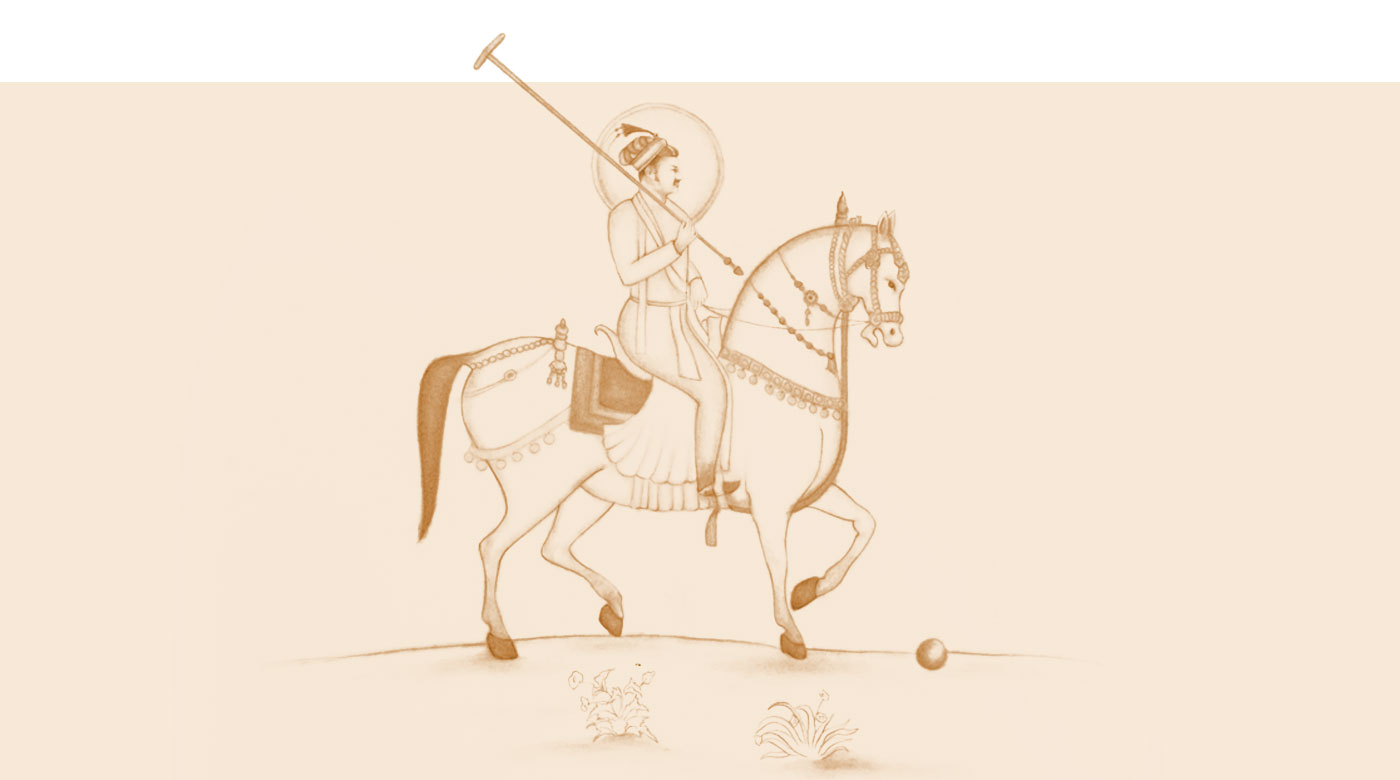 Noor Jehan also played polo. The royalty, rajas, sipahsalars, sardars and warriors of all these conquering nations played polo here. It kept them in training for battle and there is something about this aristocratic game that hearkens back to a primitive, dangerous, dashing and manly lifestyle whose desire lies in the roots of people of historical races. Kings and emperors loved playing polo and competing full tilt with their courtiers and soldiery. It is called ‘the game of kings’ and Babar (r.1526 to 1530 AD) and King Basil I of Byzantine (r. 867 to 886 AD) were reputed very fine players and others as well. Several rulers have died playing chougan (as it was called in Persia); QutbuddinAibak, mentioned above and Alexander the Great (323 BC) was reported to have died from exhaustion after playing polo in Babylon. Emperor John I of Trebizond (Anatolia) (r. 1235 to 1238 AD) got killed in a polo accident and similarly Ameer Altaz the Sardar-e-Ala of Balochistan in1656 AD. Indeed, in its own way the sport has affected the course of history so it can very well be called The Sport of Kings.

It is said that Polo originated in Persia in 500 BC in the time of the Median dynasty. The warlike horsemen of the steppes loved this game, akin to, but more sophisticated than the savage game of buzkushi. From there it spread to Byzantine, all over Asia and to China around (618 to 907 AD) during the Tang dynasty, which was supposed to be the golden age of culture there. In China, even women played polo. It also spread in India, however, first and much earlier to the mountains of the North especially the area of Gilgit and Baltistan through natural kinship with the Afghans and Turks. Later the Muslims brought it to Northern India. As early as 300 AD the State of Manipuri had their own version of polo and polo clubs developed from there and Calcutta under the British. Jaipur in Rajasthan patronized the game in the early 20th century and made it popular all over the subcontinent.

However, Gilgit has an ancient history of polo. Indeed, the name polo is the Balti word for ball. Today the annual polo festival at Shandur in the lofty Himalayas is an internationally famous event and a sight to see. Off the beaten track no vehicles can go, so the horse is the regular means of transport in the interior of Gilgit. Thus, many people still ride horses here and they have kept alive their tradition of polo; even the poorer people play polo. Also, the jawans of the army and frontier units posted here promote the sport.

But in Lahore, now for over a millennium the sport has flourished in much the same place since it started. The Lahore Polo Club is the oldest club of Lahore and as a centre for playing polo, well in this respect it is the oldest club in the world. The main field is called Aibak Ground in memory of the ancient king. The standard of polo is very high --- well, let’s say that the standard of the rest of the world is doing well. (Alas! We have to admit that the standard of Argentina is too good!) Many international teams visit and play tournements here, like Argentina, the US, France, Malaysia, England, Jordan, India, Iran, Australia, Brazil, Egypt, South Africa and others, Admission to watch the matches is free. The club has produced some great players like Brig. HuskyBiag, Col. SikkuBaig. Brig. Hisam Effendi, Gen.Yusaf, the sons of the Nawab of Tank, Gen. Yousaf, Gen Sher Ali of Pataudi, Brig.GussyHaider. And in the younger generation there is Podger Effendi (8 goal), his brother Vicki (8), Asif YarTiwana (8) and others. The goal number written after the above names is the players rating as well as handicap. The highest rating is 10. It is a ranking that is very carefully awarded to players by those that know the game. A team in a polo match consists of four players. Before the match the handicap of all the members of the team are added up. If the team is good their handicap will be high. Similarly, the total of the handicap of the opposing team is taken and the lesser total is subtracted from the larger. The difference is supposed to represent the number of more goals the better team is expected to make in the match, so the lesser team is awarded these goals before the match to ensure it will be an even game and whichever team tries harder, even an inferior team will win. You see polo is a very fair game. Even otherwise, the camaraderie that is inherent among them and the etiquette players are supposed to observe during and after the match are a complete code in themselves. These are the traditions that have come down from when royalty and chiefs played the game and it seems the because on the field the sport is so recklessly dashing, it tries to make up for this in fairness and sportsmanship.

Often in days of old, during a war when there was a lull in the battle and the two armies would be just watching each other, daring young man of the cavalry would gallop out and pass in front of the enemy thereby attracting their cannon fire. Of course, it was a dangerous thing to do and older and wiser veterans would never take such needless risks, but the bolder young riders did this as a sport to prove themselves and they enjoyed it. This is the spirit that still lies in the heart of polo players.